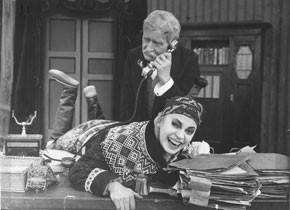 Laughing Bodies, Eccentric Gestures
Female comics and Divas in the films of the 1910s

The renaissance of early cinema in the last 15 years owes just as much to the intense restoration work carried out by film archives and museums as to the discovery, made by historians and audiences, that early filmmaking (before 1918) was not at all a “primitive” ancestor of classical cinema, but a different and autonomous form of entertainment, speaking directly to the senses and life experiences of audiences in the “belle époque”.

Within this cinema – on and off screen – women played a significantly more important role than today. The female comics and divas of the 1910s tantalized with excesses, elegance and anarchy. This program is dedicated to them.The series, curated by Claudia Preschl and Katja Wiederspahn, features more than 40 films from France, Germany, Denmark, Italy, the UK and the US. In addition to the screenings, the Filmmuseum offers a rich program of workshops, lectures and introductions.In the short comedies and serial films before WW 1, one can observe a specific type of “corporeal expressiveness”, and an excessive use of masquerades, burlesques and pantomime. The plots are often drawn from every day life, but they are told through manifold twists, turns, outbursts and gyrations of the body (including attacks on other bodies, or even the complete destruction of home furnishings).The French “Rosalie” films or the Italian series starring “Lea” reflect the fragile relation between the sexes and the social turnaround of an era. In Germany Asta Nielsen, Ossi Oswalda and Dorrit Weixler charmingly acted out in the guise of young “flappers”. The actresses functioned as subversive narrators presenting the audience with options of how to “come of age” as a woman in relation to authority figures, not shying away from sexually provocative or “inappropriate” material.This “flapper” genre acquired prominence during a time when in bourgeois circles flamboyant and body conscious female behaviour was deemed unacceptable. But these young actresses were extremely adept and brilliant in finding their allies amidst the audience.In terms of female movie stardom in the 1910s, the other end of the spectrum is represented by the Italian Diva genre. Lydia Borelli (“Goddess of transformation”), Francesca Bertini (“Goddess of passion”) and Pina Menichelli (“Goddess of contradiction”) all created their own very personal and distinctive acting styles.Their grace and expressive body language lit up the screen and created unforgettable visions of erotic abandonment and ecstasy. It was not only the real persona of the Diva but her imago (as was the case in the Opera) that helped transform the Diva films into a proper genre.These early examples of film melodrama gave their female protagonists a wide space in which to unfold and develop their unique styles. But the spectacular mise en scène of these films is also due to the frequent use of natural light and deep focus photography.Boldly self confident, the Divas cast themselves as loving, grieving beings struggling for their share of bliss – whether in lavish, luxurious, operatic settings (the Italian aristocracy was quite generous when it came to self-representation on the screen) or in surprisingly “modern” dramas set in the working class milieu.Among the titles presented in the Filmmuseum series are masterpieces such as Tigre reale, Malombra, Fior di male or Assunta Spina. In addition, film historian Angela Dalle Vacche who coined the above definitions of the film goddesses, will present the genre in a lecture on June 9th .The program is organized in cooperation with SYNEMA, the Vienna Festival and the Univeristät für Musik und darstellende Kunst (IKM). Along with Angela Dalle Vacche and the two curators, Heide Schlüpmann, Mariann Lewinsky, Eric de Kuyper and Karola Gramann will hold lectures and workshops on the subject.