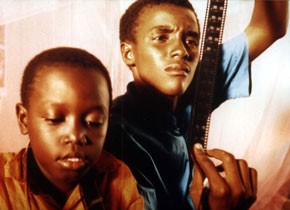 Notre musique
A film history of the present

Film museums and cinematheques are often – and justifiably – viewed as places where an awareness of the historic foundations of contemporary cinema can evolve.

Yet a reverse perspective is equally important – an approach to film history that is open to the present: film history always reaches up to the current moment, it encompasses contemporary works just as matter-of-factly as works from the early days of cinema or the "classics” of 1939 and 1976.

With the retrospective Notre musique, the Austrian Film Museum draws attention to this reverse approach and dedicates itself to the latest "era” of (film) history. The show presents forty major works of fictional and documentary cinema made between 2000 and 2006. The selection is not so much influenced by the "most-discussed” films of recent years but rather by the unbroken capacity of cinema to bear witness to life on this planet – not just in the sense of documentation, but also as an illumination of circumstances that harbor a potential for change.

Where, in which stories and forms, do filmmakers today find the energies for renewal or transformation? Which contemporary works are capable of strengthening or re-conceiving the traditions of political critique and social imagination that lie at the heart of modern cinema? And what would a "global picture of cinema today” look like if it were not automatically framed by the criteria of commercial distribution in Europe and the USA?The range of our retrospective is accordingly wide: from impressive late works by recognized masters such as Jean-Luc Godard, Ousmane Sembène, Johan van der Keuken or Allan King to the voices of a young generation testing novel methods of storytelling or reviving older, submerged forms (Lucrecia Martel, Apichatpong Weerasethakul, Fanta Régina Nacro or Travis Wilkerson); from popular and robust genre movies (Land of the Dead or Veer Zaara) to fragile, radically personal essays and "documentary fiction” (Ana Poliak, Garin Nugroho or Cristi Puiu); from faraway places where indigenous protagonists transmute their narrative traditions into epic cinema (the Inuit in Atanarjuat, Australian Aborigines in Ten Canoes) to familiar locations massively transformed by migration and new lines of conflict (Batang West Side: the Philippine diaspora in New Jersey; L’Esquive: Algerian youngsters in a suburb of Paris rehearse Marivaux).As a contribution to the New Crowned Hope Festival in Vienna, which engages the most essential ideas from Wolfgang Amadeus Mozart’s final works to look at the political and artistic practices of our own era, this retrospective not only speaks about the "state of the art” in cinema.

It is also nurtured by the conviction that film can render the present more easily readable: highly condensed, cast in concrete images and constellations, exploded from the continuum of forgetting; or by highlighting the experience of time, the duration of a process (in Yi Yi or Eureka) or a specific, insistent activity (La Libertad).Concrete constellations. A room in a Khmer Rouge death-camp overflows with portraits of murdered victims and the tired, guilty gestures of their killers (S21 by Rithy Panh). An entertainment center in Beijing gives physical shape to the concept of the "global village” – a world machine composed of simulacra, from the Taj Mahal to Las Vegas (Shijie / The World by Jia Zhangke). An Israeli filmmaker talking on the phone to his Palestinian friend, surrounded by fear and fantasies of revenge which bloom like flowers of evil on their common territory (Avenge But One of My Two Eyes by Avi Mograbi). A group of children in a playground who discuss the tragic love story we have just witnessed and, by expanding on it, break through the darkness, just like the sun may suddenly emerge from a thick layer of gray clouds (Sehnsucht by Valeska Grisebach).All this is part of "our music”: textures, sounds, spaces and characters that invest the abstract concept of "contemporary reality” with life. The title of the retrospective, borrowed from Jean-Luc Godard, is neutral with respect to the dark or light portions of this music.

Notre musique does not define itself as an escape from the "horrors of the real” but suggests to add those "refined and spiritual things” to our sense of reality that, in Walter Benjamin’s words, are always alive in the fight for the crude and material things: confidence, courage, humor, cunning, fortitude. Cinema has the ability to pass on these powers.The seven new films commissioned for New Crowned Hope will also be shown in the context of the retrospective. Several filmmakers will be present to speak about their work.

To inaugurate the retrospective on 1 November, a wonderful short film made half a century ago will be shown together with the Godard film: Rudy Burckhardt’s and Joseph Cornell’s contribution to the Mozart anniversary year 1956: What Mozart Saw on Mulberry Street. "Notre musique” is part of the New Crowned Hope Festival, staged by Peter Sellars on the occasion of the Vienna Mozart Year 2006.