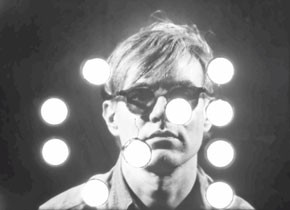 In 2005, the joint retrospective between the Film Museum and the Viennale is devoted to the films of Andy Warhol. Warhol’s incomparable and enormously influential oeuvre was created over a period of merely five years, at the high point of the "Factory". Between July 1963 (Sleep) and the autumn of 1968, when Warhol ended his activities as a director, he made some 60 published and a few hundred unpublished films.

The intensity of this work, its radical newness and Warhol‘s status as the "artist of the moment" (including his entourage of "Superstars") helped the films receive worldwide fame almost overnight. Yet very few people have actually seen these films; Warhol withdrew them from public view in 1972, and it was only after his death that a lengthy phase of film restoration began, a phase which is still ongoing today. The richness of these films slowly comes to light now – it’s a whole new world, spread between art and document, glamour and minimalism; and between the two extremes of highly enchanting 4-minute portraits (the so-called Screen Tests) and epic “canvasses of time and image” (such as Sleep or Empire).

The Retrospective brings together more than 30 pivotal works, plus, as a special feature, more than one-hundred examples of the legendary Screen Tests, which have rarely been shown in Europe to date. The programme was selected by the great American filmmaker Jonas Mekas, a long-time friend and Warhol collaborator and a profound connoisseur of the artist’s films. The selection makes it easy to grasp the significant moments and stages in Warhol’s development as a filmmaker.

Aside from an early, quasi-Beat narrative “starring” Dennis Hopper and Taylor Mead (Tarzan and Jane Regained... Sort of ), the first year of Warhol’s cinema is marked by the silent, seemingly eventless minimal films like Blow Job, Eat, Haircut, Kiss and the first Screen Tests. The main filmic “unit” of these works is the silent 100-foot film reel – unedited four-minute shots (projected at a slightly slower speed), in which the performers hover between trance and an almost electric mode of presentness.

Towards the end of 1964, Warhol began to stage and record dramatic pieces and improvisations. In films such as Harlot, Camp, Hedy and Vinyl, the "Superstars" – flamboyant creatures of flesh and voice – are now put at the center: Mario Montez, Gerard Malanga, Baby Jane Holzer and the underground artist Jack Smith, who was Warhol's most important model as filmmaker. These "dramas" can also be perceived as social experiments within the vacuum conditions of the Factory.

The years 1965 and 1966 are strongly marked by Warhol's collaborations with The Velvet Underground & Nico (who are involved as musicians and/or actors in 7 films of the show) and with the fabulous "Poor Little Rich Girl" Edie Sedgwick, who is the focus of six films. If ever there was a lasting moment shared between Pop Culture, High Art, the Underground and the Upper Class, then this historical moment was it ? the eternal second between „Femme Fatale“ and „All Tomorrow’s Parties“, between Kitchen and Beauty #2, between Outer and Inner Space ? in double-screen projection, with loud and fragile music oozing from both loudspeakers, and Gerard Malanga at the whip.

Rather unexpectedly, Warhol's intense, three-hour panorama of "his" scene, The Chelsea Girls, became a commercial success as of September 1966, without having betrayed the artist’s previous practice of filmmaking. His playful, calculated-innocent analysis of the age of the media and the “economy of celebrity” now turned Warhol into a celebrity icon himself. He ran the risk of being misunderstood as a "normal director", and his late narrative films like My Hustler (which soon became a classic of gay cinema), Bike Boy and The Imitation of Christ indeed give an inkling of what sort of direction Warhol's career might have taken as an ironic “Indie” or “Cult” filmmaker. However, in late 1968, after surviving the attempt on his life, he turned over the actual film work to Paul Morrissey and finally realized for himself the conceptual dream of acting as "Studio mogul".

Warhol's actual film oeuvre up until 1968 stands in sharp contrast to the Warhol image of the 1970s and 80s. His “biography and interests are inscribed in his movies on a more personal level” than one might think, “his location as an artist within the avant-garde, his personal and professional relationships, his identity as a homosexual within the various worlds of gay culture in the 1960s; his interest in pornography – all have left explicit traces in his films." (Callie Angell)

The German poet Helmut Heissenbüttel wrote in 1968: "What I owe to Warhol is that he showed me how to see with the help of the camera." And one might well add: how I can be seen with the help of the camera and the screen. These films are not about voyeurism, contrary to all such accusations. The spectator is included every bit as much as the "superstars", making the spectator himself a virtual superstar. Warhol’s films always return the gaze.

In the course of this show, the Film Museum will present several double-screen projections. The Screen Tests are distributed amongst various programmes, and can also be seen, with entirely different samples from the series, in the framework of the Screen Tests Extravaganza on October 16 (from 2 to 7 p.m.). This mode of "Temporary Installation" also applies to Sleep (October 21 from 8.30 p.m. to 2 a.m.) and Empire (October 23 from 12 p.m. to 8.30 p.m.). All three "Extravaganzas" will take place with free admission and with the bar remaining open through to the end of each screening. Sleep will be accompanied by low-level live radio sound, in the manner of some of Warhol’s 1960s presentations of this work.

In addition, the Film Museum will be showing several films on Warhol, including works by Jonas Mekas, Marie Menken, Gerard Malanga and the magnificent rediscovery The Match Girl by Andrew Meyer (which, incidentally, documents the making of the Screen Tests).

Retrospective of the Austrian Film Museum and the Vienna International Film Festival – selected by Jonas Mekas. A bi-lingual catalogue with original essays and interviews as well as selected historical contributions will be published to coincide with the Retrospective. Amongst the guests who are expected is long-time Warhol collaborator and “Superstar” Gerard Malanga.