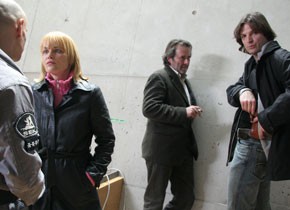 Dominik Graf is an anomaly in German cinema and television – and he is many things at once: an auteur in the spirit of the French New Wave or New Hollywood; a teacher, critic and essayist; a genre filmmaker who cunningly fought for freedom within narrowly staked formats. To this "cine-animal," the Film Museum now pays tribute with a multi-faceted project: 15 of Graf’s films will be screened in the presence of the director. A "carte blanche" selection of additional works will highlight some of his main inspirations (films by Nicolas Roeg, Eric Rohmer, Arthur Penn, Philippe Labro, and Pasquale Festa Campanile). On opening night, a new book in the FilmmuseumSynema series will be launched: Dominik Graf, by Christoph Huber and Olaf Möller. In collaboration with Ralph Eue, Graf will also conduct a university course at the Film Museum, covering both his practical and theoretical approaches to cinema.

In an early treatise, the great British critic Raymond Durgnat distinguished between two types of filmmakers: the Aristotelians and the Platonists. The first always look for new balances among their contradictions; the latter want to create an absolute by eradicating all ambivalence. Dominik Graf does not object when one calls him a perfect example of the Aristotelians. The question is never about Ozu or pulp cinema: Graf would always choose both, and he would place them just close enough to each other so that sparks can fly. Cinema for him is to experience the world from moment to moment, combining an Ozu-like mono no aware (the "ahh-ness" of things) with the kiss-my-ass attitude of a gnarled industry veteran.
Graf views himself as a “pro” – a knowing dismissal of the post-Oberhausen type of “Autorenfilmer” who dominated the West German cinema of the 1970s. From the start, his ideal was always the director-as-craftsman, working in an industrial context. He believed that public television and the warm breast of Bavaria offered possibilities similar to the classic studio system. In this anonymous context, he wanted to tailor a pret-a-porter kind of cinema and subvert the patterns with stylistic panache andvarious unconventional measures, all the while remaining “invisible”, like a thief in the night.
Among the major filmmakers in German cinema and television after the 1970s, Graf is by far the most dynamic, engaging, and daring storyteller. His narratives often start with a jump, arising straight from his characters,their hopes and fears, their desires, their depths. Like Karoline Eichhorn, intoxicated by the Corsican night, who stumbles into the arms of two legionnaires in Der Felsen (2002), or Mišel Matičević, who longs for the porn magazine protagonists of his youth that he sometimes finds on the internet in Komm mir nicht nach (2011), older but still beautiful: these are concise moments in which everything is said about love and what it does to us.
Graf, born in 1952, graduated from the Munich Film School in 1979, then started working in production: he directed series episodes by the yard and in doing so revolutionized early evening TV, starting in 1983 with Der Fahnder andcontinuing with two iconic works in the famous “Tatort” series, Schwarzes Wochenende (1984/86) and Frau Bu lacht (1995). In between, he demonstrated his versatility and virtuosity in feature films. The "kitchen sink" drama-cum-biker-film Treffer (1983) became a touchstone for an entire generation; Die Katze(1988) is simply the best crime film ever produced by a West German director. Following up on this rare critical and commercial success, Graf directed the paranoid action fresco Die Sieger (1994) – a masterpiece manqué and a box-office flop that nearly ended his career. Until that point, he had considered television as an interesting possibility; now it became his adopted home from which he rarely strayed. Mentally and stylistically, however, he always continued to make movies.
During the late 1990s Graf reinvented himself once again: Das Wispern im Berg der Dinge(1997) is a portrait of his father, German actor Robert Graf, as well as a self-portrait, and it would be followed by other essayistic documentaries. Graf's narrative style was also becoming more fragmented and fluid, and "genre" turned into a toolkit that allowed for all manner of hybrids. Die Freunde der Freunde (2002): a coming-of-age drama and a metaphysical horror story; Das unsichtbare Mädchen (2012): a modern "Heimatfilm" and a revenge melodrama; Das Gelübde (2007): an artist's biography and a political-historical thriller.
Like Dominik Graf himself, the most famous unknown of the German media landscape, these films are many things at once; unique,  contradictory, not fitting in, yet safely floating above it all.
Related materials
In Person Video Document Dominik Graf 21. March.2013
Photos 2013 - Dominik Graf
Books   Dominik Graf
Share on