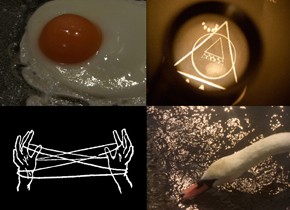 In the introduction to his book Making Money Henry Hills writes: "Viewing experimental film should be like working out: if your eyes are sore afterwards you know you’re getting stronger." Along these lines, Hills’ own body of work might be described as a particularly wide-ranging and multi-faceted training schedule for the senses: it includes diary-like essays (Porter Springs 4); formally explosive discussions about capital (Money); reflections on the cinema and his own approach to the medium (Kino Da!); adventures in the lower depths of a bat cave (Goa Lawah); and psychedelic versions of ethnography (Bali Mécanique). Splitting his time between Prague, Vienna, and New York (the downtown art scene of the early 1980s was a defining moment in his career), Hills practices filmmaking as a negotiation between the personal and the political, and between two (seemingly) contradictory urges: to “simply record the world” – and to fully remap it, seduced by the intoxicating means of montage.

All of Hills’ films are connected through a surgical precision reminiscent of both the coolness and the complex improvisations of jazz. However, as his regular collaborations with the composer and musician John Zorn readily demonstrate, jazz is not just a stimulus, but a formative element in these works. A closer inspection of Hills’ oeuvre also reveals other genealogies: there are traces of Hans Richter, Jonas Mekas and Stan Brakhage, and a strong interest in the relationship between body and camera. In the end, however, it is the viewer’s body and senses that these audiovisual compositions most intensely engage with – melodious flow and dissonant verse are always present as options, embedded in a rich and ever-changing pattern of moviemaking gestures.

The Film Museum pays tribute to Henry Hills with two programs that provide an overview of his almost 40 years of filmmaking. The artist will be available for public discussions.