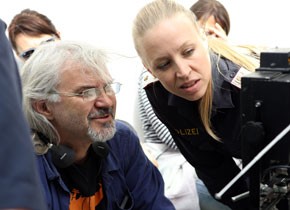 There'll Be No Tears Tonight
Michael Glawogger: A Film and a Novel

Michael Glawogger, writer and filmmaker, died on April 22, 2014, in Liberia. One year later, the Austrian Film Museum stages an evening in Michael’s memory, celebrating the enormous vitality of his work with the Vienna premiere of his final completed film, Die Frau mit einem Schuh, and the launch of his posthumously published novel, 69 Hotelzimmer.

The program will begin with a reading from the book, published by Hans Magnus Enzensberger’s and Franz Greno’s renowned Andere Bibliothek (Berlin). As a multi-faceted reflection of Michael’s own decades-long "circling of the globe," the novel tells the story of a traveler who stays in various hotels around the world and there meets various different characters. “Glawogger caresses the details and thus reveals the imprint of the whole,” as Eva Menasse writes in her afterword.

With its intense focus on so-called “provincial life”, Die Frau mit einem Schuh (The Woman with One Shoe) appears at first glance like an opposite of the "global view" taken by 69 Hotelzimmer (69 Hotel Rooms). But this rural policier – set in Pitten, Lower Austria, the last place where Glawogger lived – is characterized by the same attention to human behavior and unexpected stylistic choices that were always central to Michael Glawogger’s work: "In reality, this is not a thriller, but a movie about love and loneliness as it heads towards the isolated faces of men reflected in window panes." (Lukas Foerster). Glawogger's art, which transcends the rampant formatting of existence and media in favor of a completely individual world view, is demonstrated most beautifully in a great musical moment of cinema with Karl Fischer and Nina Proll in a bordello: "Unchain My Heart."

In addition to the book’s editors Andrea Glawogger and Eva Menasse, numerous members of the film cast will be present, including Karl Fischer, Ingrid Burkhard, Hary Prinz, and Michou Friesz.

Related materials
Photos 2015 - There'll Be No Tears Tonight
Share on