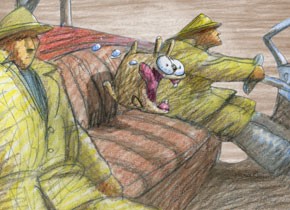 “I could do a minute of animation a day, so theoretically, I could do a film in three months without any interruption,” claims Bill Plympton, born in Portland, Oregon in 1946. His animated film oeuvre, stretching from the late ’70s to the present day, seems to prove him right: countless shorts, among them cult classics such as 25 Ways to Stop Smoking (1989), the Oscar-nominated Guard Dog (2004) and couch gags for The Simpsons (2012–16), stand alongside seven hand-drawn, for the most part independently produced, feature films, as well as commissioned works for Madonna and Kanye West, MTV, and Volkswagen.

At 14 years of age, Plympton sent his debut to Disney. While he was turned down and reprimanded due to his age, many years later he was offered to work on Aladdin. This time it was Plympton’s turn to refuse: out of concern for his independence. “We don't need any more children's stories,” says another of his premises (not coincidentally, Plympton’s work can be considered an important inspiration for The Simpsons and Family Guy). His films are politically incorrect, filthy, brutal – and yet characterized by a tender love for detail. They provide us with bizarre, “forbidden” fantasy images and rough pieces of life advice, without ever missing their actual goal: making us laugh with the sweep of his lines. Throughout these 40 years, his style has often changed but, as is the case with the coarseness of his settings and subjets, always remaining recognizable as “true Plympton” at the core.

A joint project of the Austrian Film Museum and VIS Vienna Independent Shorts. Following the presentation of David OReilly's and Don Hertzfeldt's works in the recent past, their role model Bill Plympton will now be the guest of the Film Museum and the VIS festival. The program will give insight into his short and feature film work, ending with a masterclass.

No ticket reservation possible for the masterclass with Bill Plympton, advance ticket sales at the box office.