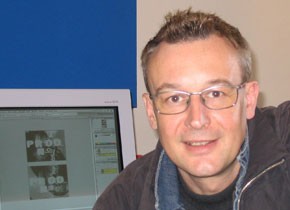 The Austrian Peter Tscherkassky is considered one of the great contemporary avant-garde filmmakers; his stimulating, multi-layered "handmade" found footage films have been celebrated throughout the world for years. In September, the Film Museum will present Tscherkassky's complete works, including the Austrian premiere of his new masterpiece, Instructions for a Light and Sound Machine. For the purpose of this show, Tscherkassky has put his own films in the context of some "reference works" by other artists. This carte blanche includes films by Man Ray, Bruce Conner, Kurt Kren, Pat O’Neill and others.

Tscherkassky, who was born in 1958, is one of the leading representatives of the "Third Generation" in Austrian avant-garde filmmaking which defined itself around 1980 using the Super-8 medium. His earliest works already revolve around the question of filmic self-reflection; at the same time they are characterized by a "physical delight" in the mechanics of cinema and the material of film. Aderlass (1981) is determined by the legacy of Viennese Actionism, Liebesfilm (1982) and Motion Picture (1984) by structuralism, and the high-speed motion study Manufraktur (1985) offers a portent of the "handmade work" to come. Between the brilliantly photographed, psychoanalytically informed works tabula rasa (1989) and Parallel Space: Inter-View (1992) lies Tscherkassky's transition to 35mm film. Since then he has occupied himself in a unique fashion with the “low genres” of cinema - home movies in the case of Happy-End (1996), period films and horror movies in his magnificent "Cinemascope Trilogy", made between 1997 and 2001 (L'Arrivée, Outer Space and Dream Work). The Trilogy and his most recent film signal a high point in Tscherkassky's work - his elaborate methods of contact-printing found material in the darkroom produce astonishing and highly seductive effects.

In connection with this project, the first book about the filmmaker will be presented: "Peter Tscherkassky", edited by Alexander Horwath and Michael Loebenstein, is extensively illustrated and includes a number of essays about Tscherkassky’s work (in German and English throughout).

Rounding off the Retrospective will be two comprehensive workshops to be held by the artist on September 24 and 25; these will offer insights into his work methods and aesthetic premises, as well as glimpses of his unknown early works in the Super-8 format.