Numerous books in Amos Vogel's private library are provided with annotations, commentaries, and marginal notes in which Vogel enters into an intensive exchange with the texts and authors. The interested reader annotates skeptically, critically, or enthusiastically; in his notes he advocates or rejects passionately; in his glosses he criticizes sharply or rejects decisively; the corresponding passages are heavily underlined or crossed out, circled, highlighted, or marked.

His annotations reveal a particular interest in the life and work of Sigmund Freud, and we take this interest here as the starting point for a small case study with regard to the annotated reading of the subversive curator. To this end, let us first look at the quantifiable dimension of his interest in Freud: a keyword search yields 310 books in the Amos Vogel Library that fall into the fields of knowledge of psychoanalysis, psychology, or psychiatry. Of these, about half, 153 books to be exact, are annotated, and of these texts, 65 have an explicit reference to Sigmund Freud, whether in his capacity as author, co-author, or as an essential reference figure. Handwritten commentaries by Vogel can be found in 39 of these books, and thus about 12% of the psychoanalytic publications in the Amos Vogel Library are available to our case study.

Fig. 1: Sigmund Freud, Selbstdarstellung. Vogel's underlinings include: "Above all, I was struck by the imposition that I should feel inferior and not belong to the people because I was a Jew. [...] A certain independence of judgment was thus prepared." It is obvious that Jewish origins and forced exile constitute two significant parallels in the lives of the two native Viennese, but Vogel's annotated readings also contain evidence of similarities that go beyond this. For example, in Peter Gay's study of Freud's atheism and the beginning of psychoanalysis, Vogel places his emphasis on this observation:

"As a stranger to the faith of his fathers and less than welcome in the culture that surrounded him, he felt doubly alienated and saw himself as a marginal man. This, Freud was convinced, had secured him an inestimable advantage." (Gay 1987:136).

Vogel comments on the highlighted passage by saying that "to be outsider" can certainly be an "advantage." 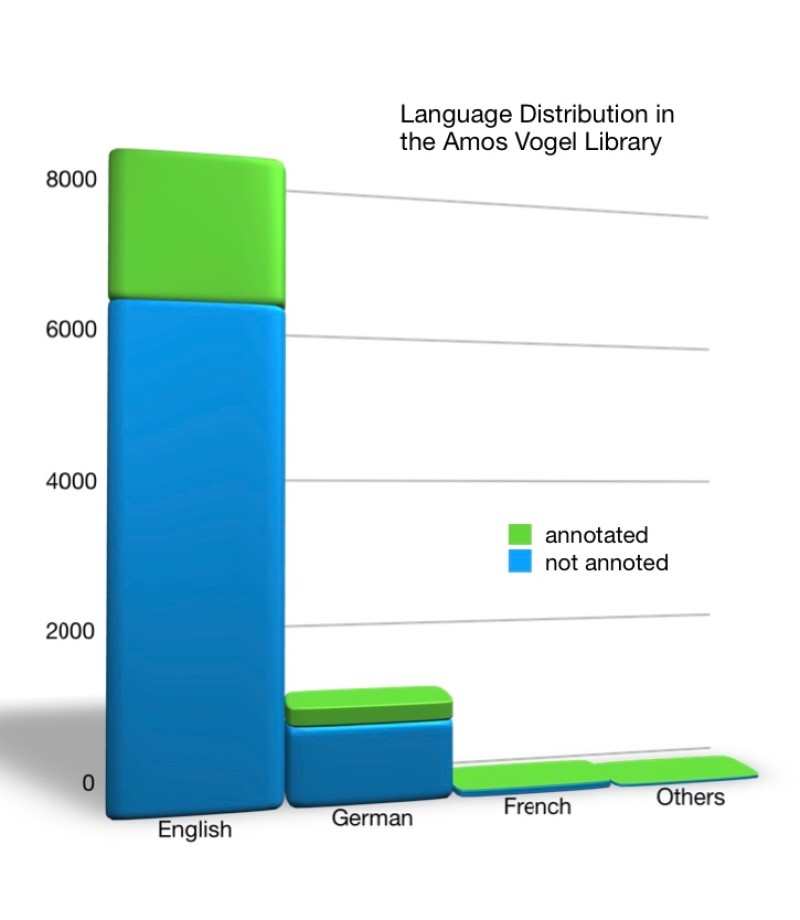 Amos Vogel had also perceived himself as an outsider in his New York exile, not least because Nazis had robbed him of his mother tongue, as he vividly put it, for example, in Egon Humer's 2001 documentary Mosaic in Confidence. Against this backdrop, Vogel's preoccupation with Freud can also be understood as a lifelong effort that may have consisted of keeping alive the memory of the stolen mother tongue in order to remember the images and figures of thought it harbored. This concern is also reflected in the quantitative composition of his library, which, although it consists overwhelmingly of English-language publications, with about 85% of all books and texts, also contains about 14% German-language publications. Of the English-language texts, about one-third are annotated, and although among the German language publications this average is only about one-quarter, more than half of all publications in the field of psychoanalysis are annotated with highlights and comments.

Fig. 3: Books, languages and annotations in the Amos Vogel Library

A reading of Bruno Bettelheim's study Freud and Man's Soul reveals the factual reasons for Vogel's effort to engage Freud's thought in his native language. By analyzing the shifts in meaning Bettelheim detects in English translations of Freud's texts and ideas, and his critical evidence of a general tendency to narrow and specialize Freudian terminology prompts Vogel's repeated commentary and approval. Bettelheim's analysis is based on his examination of Strachey's Standard Edition, of which he states in general:

"[...] the translations in the Standard Edition are for the most part an improvement on those in earlier editions–although many, many shortcomings remain–all discussions presented here are based on this edition [...] the overwhelming majority of Americans who read Freud do not read the Standard Edition but a variety of cheaper editions that reprint the earlier, inferior translations." (Bettelheim 1984:51) Vogel marks Bettelheim's statement several times, and notes on the opposite page at the very top: "Here start the errors." He connects this statement with Bettelheim's consideration by an arrow pointing across the page and adds by way of explanation: "My little Freud Volumes are based on earliest translat[ions], not even the better later Stand[ard] Edit[ion]." Amos Vogel is alarmed to discover that his previous acquaintance with Freud was based on translations that Bettelheim had rejected round and round, and as a conscientious reader he draws far-reaching consequences from his newfound insight - after his encounter with Bettelheim's translation criticism, Vogel had decided henceforth to acquire and study Freud's writings only in the German-language original. As rigorous as Vogel is in his epistemological conclusions, he remains practical in their economic implementation, for he unhesitatingly opts for the cheapest possible copies so as not to have to make any intellectual sacrifices, and so the German-language texts of Freud can be found in the Amos Vogel Library as inexpensive paperback editions from the Wissen series of Fischer Verlag. Vogel remains unreservedly focused in his love of books on the examination of ideas and content; bibliophilia in the conventional sense, directed at the collection of dignified and precious books, probably had to appear to him as a cultivated form of vanity. His decision to study Freud in the mother tongue that had been stolen from him by the Nazis also entails a re-encounter with his own past, which sometimes flashes up in unexpected places. For example, Freud's treatises on sexual theory contain this reflection on the social genesis of nervousness:

"Also, the physician is often enough made thoughtful by the observation that just the descendants of such fathers fall prey to nervousness, who coming from simple and healthy rural backgrounds, descendants of raw but strong families, who come to the big city as conquerors and allow their children to rise to a culturally high level in a short period of time." (Freud 1976:121)

In his German paperback edition, Vogel marks Freud's observation and provides it with the English-language note that this fact also applies to himself.

That reading in the purloined native language proves challenging is evident from the fact that Vogel annotates the German texts in English throughout. He also consults most of the secondary literature in English, reading, for example, Ernest Jones The Life and Work of Sigmund Freud in an abridged version in which he highlights an anecdote Jones recounts from Freud's youth. 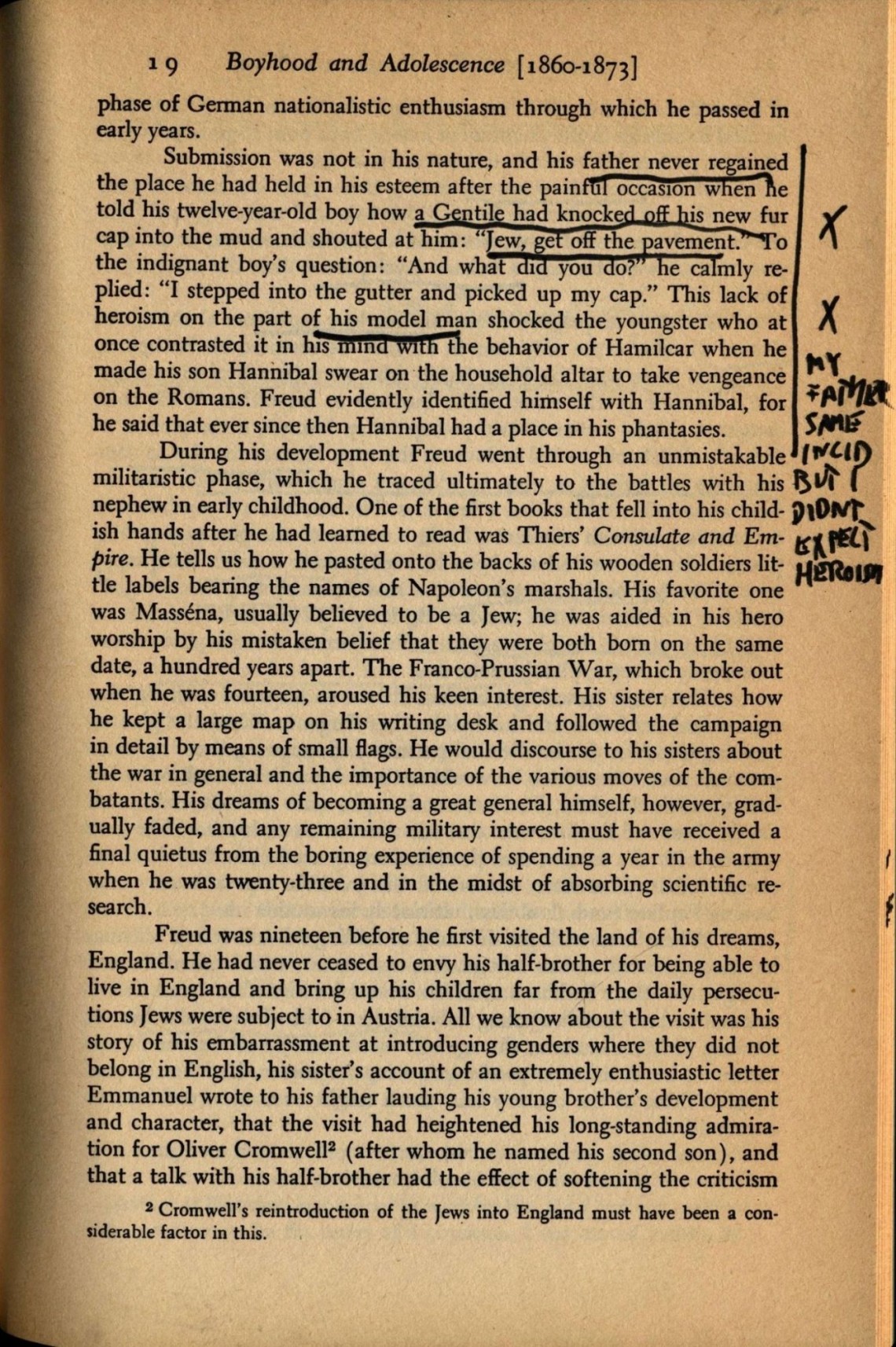 It concerns an anti-Semitic attack that Sigmund Freud's father Jakob faced in Vienna at the end of the 19th century. Jones describes the effect the incident is said to have had on the son:

"[...] his father never regained the place he had held in his esteem after the painful occasion when he told his twelve-year-old boy how a Gentile had knocked off his new fur cap into the mud and shouted at him: 'Jew, get off the pavement.' To the indignant boy's question: 'And what did you do?' he calmly replied: 'I stepped into the gutter and picked up my cap'." (Jones 1961:19)

According to Jones, this "lack of heroism" had irretrievably shattered the adolescent Sigmund's esteem for his father and "his model man," but Vogel counters the anecdote with his own biographical recollection:

"My father same incid[ent] but I didn't expect heroism."

Amos Vogel's remark confirms the everyday nature of anti-Semitic attacks in the Vienna of the Austrofascist Ständestaat and leaves no doubt about his personal attitude. Vogel's comments not only identify him as a critic of worlds of ideas in the book universe, they also provides evidence that as a reader, human being, and contemporary he was always ready to subversively undermine any kind of idealization and pathos.

Fig. 7: Annotation in Ernest Jones, The Life and Work of Sigmund Freud