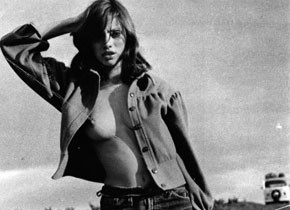 "Coming soon to a cinema near you: THE SOCIETY OF SPECTACLE. And soon thereafter, everywhere else, ITS DESTRUCTION." The unconditional announcement of revolution in Guy Debord's trailer for his film The Society of the Spectacle strikes one as almost a joke. In fact, it is one, not merely in today's society of the heightened spectacle, but already in the framework of 1973 when the film was made. Just like the entire oeuvre of Guy Debord (1931-1994), however, the joke yields its cutting meaning only when seen not as the usual muscle relaxation following a rigidly struck pose of absoluteness, but as the most genuine intensification of such absoluteness. It is the grimmest gallows humor in 20th century art, cinema and social theory.

At the same time, Debord's lucid severity reveals another kind of life, even if only by emphatically insisting on those (biographical) experiences of freedom and revolt which he conjures up in his films time and time again. He protected this other life by refusing to "play the game", never turning into one of those common public intellectuals (court jesters) populating the spectacle as "critical minds". Instead, he chose to make himself almost invisible. As early as 1959, his second film declares: "A film on this generation will only be a film about the absence of its real creations." Debord was less than 30 years old at the time, and “this generation” was that of the Lettrist and Situationist Internationals, in whose circles he moved.

Today, the 1959 projection seems like a prophecy fulfilled, above all concerning Debord's films. His posthumous renown as one of the crucial authors of revolutionary cultural criticism and radical art practice does not mean that his cinematographic oeuvre has been incorporated into the canon. The 3 features and 3 short films, made between 1952 and 1978, remain relatively unknown (partly owing to the author's own decree banning the screening of his films from 1984 on), although this is exactly where his thought as well as his paradoxes are set out in their most condensed form.

Six essayistic, powerfully eloquent monuments of cinema "against cinema", shifting between photography, moving image and voice, and fluctuating between rage and melancholy. Works that launch a frontal attack on the political and cultural consensus of the media consumerist society, thereby choosing the mass medium of their era as the weapon – in black and white, to be sure. These are simultaneously "strategic" and "excessive" films; strategic not just in their quotations of Clausewitz, Johnny Guitar, Karl Marx, Children of Paradise and Baltasar Gracián, excessive beyond their continual taking aim at the big picture. They lead their comprehensive attack entirely on the basis of a singular, personal experience. That is what makes them shareable, communicable, accessible – even if nowadays hardly anyone likes to imagine what a life, an everyday on the other side of the spectacle could look like.

After years of preparation the Austrian Film Museum has been able, as the first museum institution worldwide, to acquire Guy Debord's six films for the collection. Starting on January 29, 2016, his entire “counter-cinema” will be shown, accompanied by his 1994 "TV testament" and Isidore Isou's Lettrist classic "Traité de bave et d'éternité" (1951). Alice Debord (Alice Becker-Ho), Debord's close accomplice since the late 1960s, and filmmaker Olivier Assayas, thanks to whose intiative Debord's cinema has become more visible in recent years, will be present at the opening.

This project is generously supported by Phileas – A Fund for Contemporary Art.

Phileas is a new, philanthropic organisation based in Vienna that raises private funding to support contemporary art. It brings together artists, collectors, galleries and museums, collaborating with them to enable the production, exhibition and acquisition of art for public collections. Phileas was founded in response to current debates regarding cultural philanthropy and the future of public funding. It is an independent, non-profit organisation, committed to long-term relationships with its partners.