Vogel's annotations suggest alternative and subversive readings in many of his books, and this fact can be excellently illustrated by the last novel by Vogel's beloved author Stanislaw Lem. Fiasco is a large-scale novel set in a far-advanced future of humanity, written by Lem in 1986 after his emigration from Poland. In this small case study of Amos Vogel's science fiction reading, we will successively include only those passages that he himself has highlighted, marked, and commented on. In this way, of course, the literary shape that Lem gives to his narrative remains largely in the dark, but all the brighter light is shed on those aspects of Lem's futurological reflections that most interested Vogel. So, let us take the paperback edition of the English translation of Stanislaw Lem's Fiasco, which was published in 1986 in New York by Harvest Books, extensively annotated, commented on, or, to put it casually, thoroughly graffitied by Vogel and also abundantly battered by the intensive reading.

Lem's narrative is packed with the description of futurological worlds, futuristic technospheres, and logical paradoxes of all kinds, but it would not be Lem if this absurd cosmos were not made the occasion for very human, ethical, and philosophical reflection. The first and decisive problem facing scientific reflection in Lem's narrative is the question of why the universe is actually silent.

"The Mystery of the Silent Universe had become a challenge to Earth's science." (p. 87) 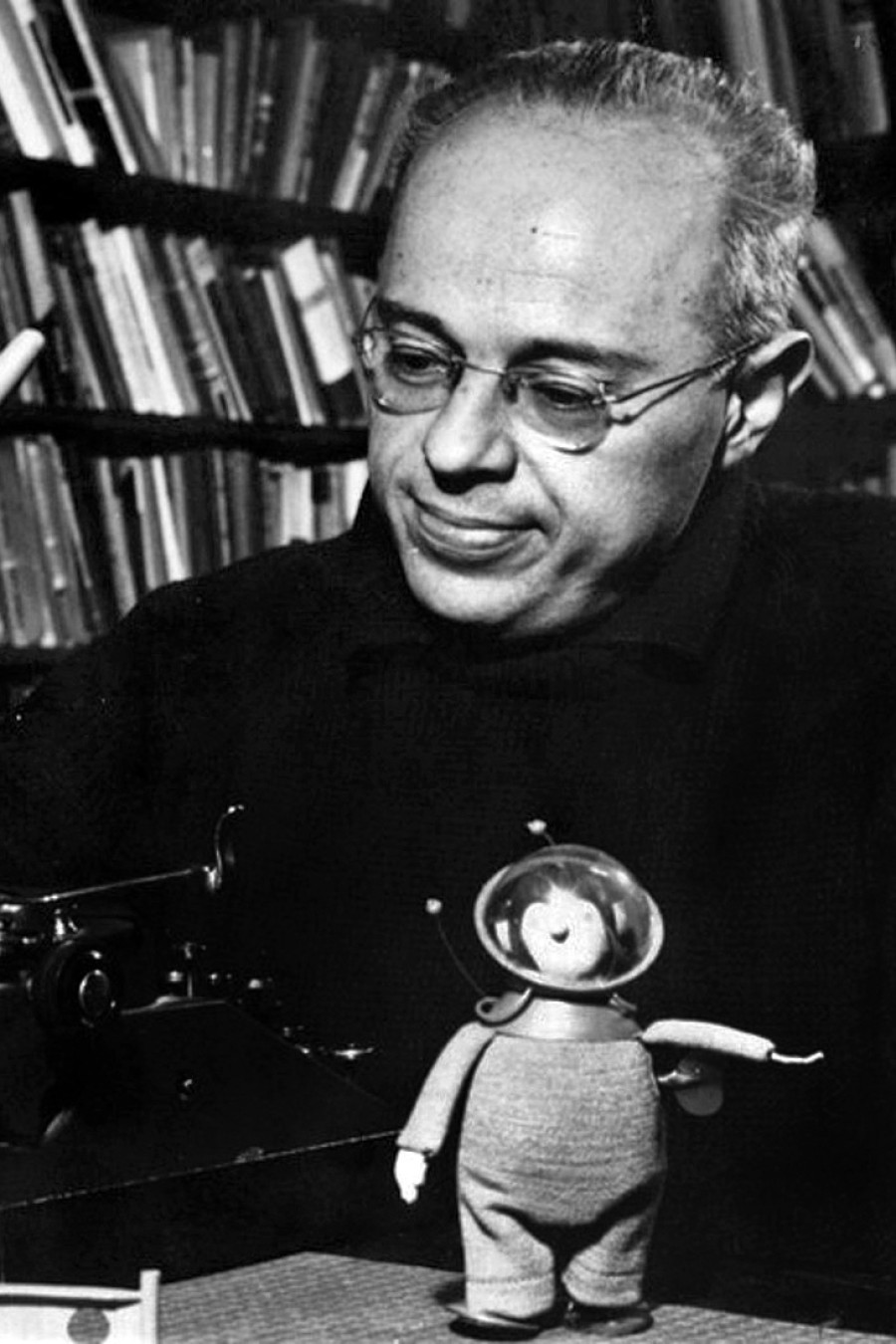 In exploring the question of why the universe does not speak to earthlings, humanity develops a series of contradictory considerations throughout its history, a prelude to which Lem summarizes with this observation: "Hence the pessimistic conclusion that Earth was unique not only in the local arm of the Milky Way but in a myriad other spiral galaxies." (p. 88)

However, the early human-historical assumption must be revised with the advancing knowledge of the sciences: "In a Cosmos that contained people one had to expect the birth of life outside the Earth as well. A succession of surmises followed, to reconcile the fertility of the Universe with its silence." (p. 89)

From these new considerations numerous hypotheses about the possible existence of cosmic civilizations follow and this is the area where the interest of the reader Amos Vogel awakens. He begins to mark whole passages and he highlights, for example, the thread of thought, that a technological explosion did not only carry humanity "to higher and higher levels of control of the the forces of Nature. It also carried civilizations apart, in directions too different for them to understand one another through any commonality of thought. There was no such commonality. That was an anthropocentric fallacy that people had inherited from the ancient faiths and myths. There could in fact be many different intelligences, and it was precisely because there were so many that the sky was silent." (p. 90) 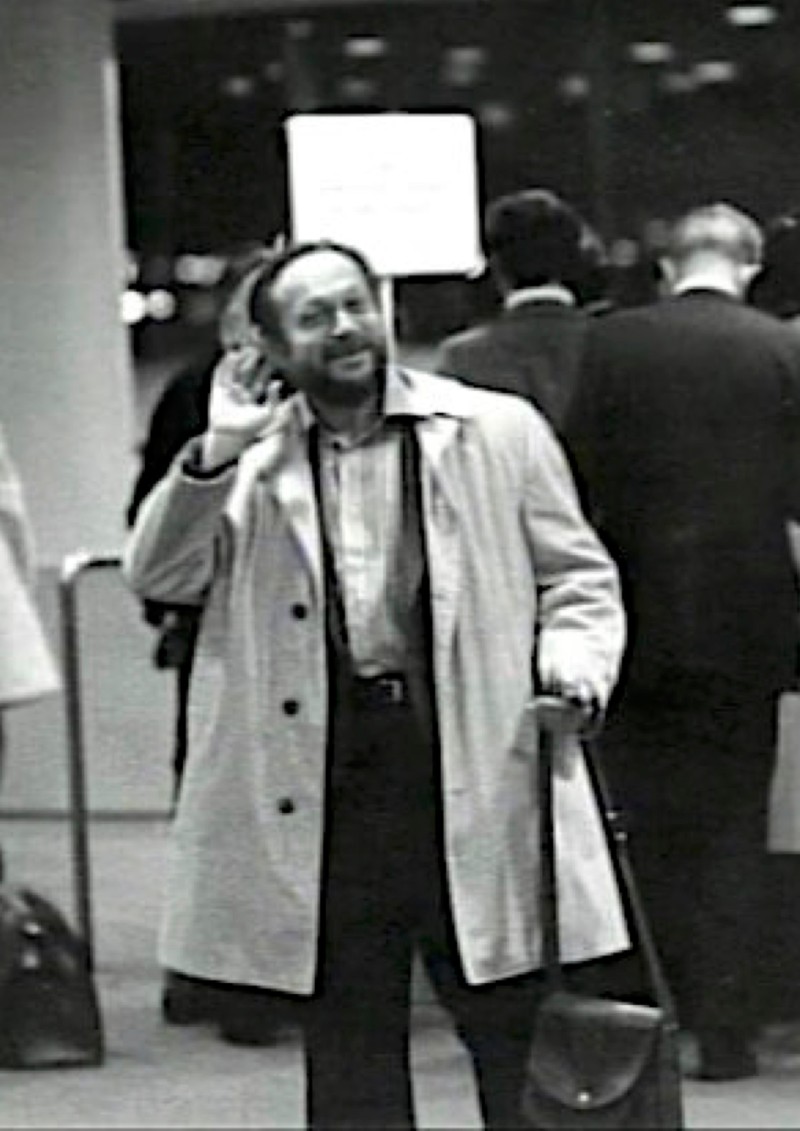 It is epistemic paradoxes of this kind that Amos Vogel is particularly interested in, for in his omnipresent skepticism he always suspects a hidden core of social and political problems behind all supposedly scientific rational questions. Accordingly, he emphasizes the consideration that, "technology was a domain of fatal traps and whoever entered there could easily come to a bad end. Intelligent Beings were able to see this threat, but only when it was too late." (p. 91)

In the face of such an ever-threatening trick of technological reason, the narrative raises the question of whether contact with extraterrestrial beings could be feasible at all, and Vogel highlights Lem's corresponding remarks on this dilemma, which deal with the concept of a contact window: "This was the interval time in which Intelligent Beings had already reached a high level of applied science but had not yet undertaken to change the natural Intelligence given them – what would correspond to the human brain. The 'window of contact' was, cosmically, a moment. [...] Outside the window, for civilizations either immature or too mature, silence reigned. The immature lacked the power to communicate, while those too mature closed themselves off."  (p. 92) 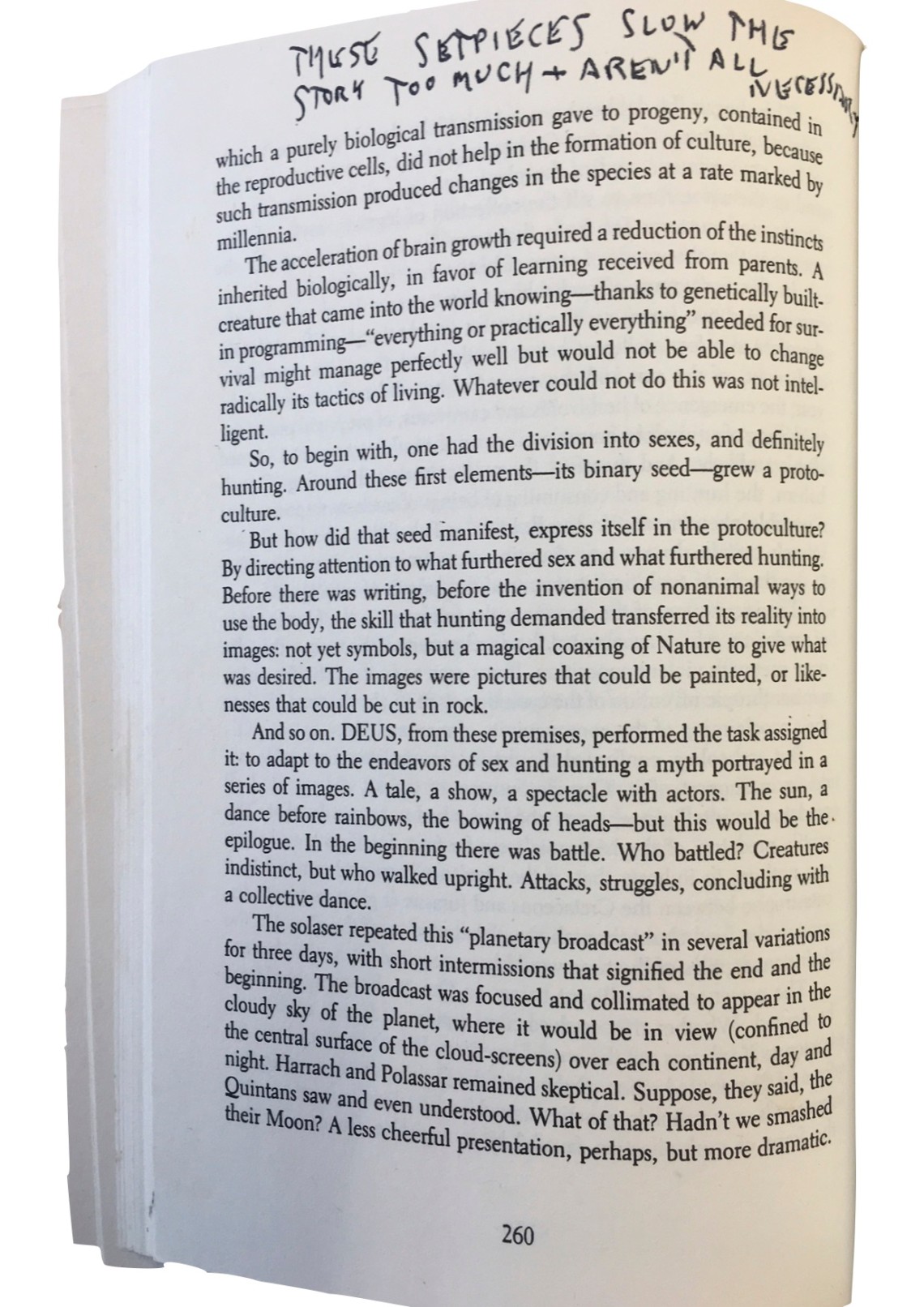 In Lem's narrative there now follow long chapters with detailed descriptions of the form and function of unbelievable futuristic technospheres, ingenious and borderline speculations about the possibility of interstellar flights, and detailed treatises about outrageous astrophysical undertakings for the cunning exploitation of cosmic gravitational forces in order to sneak past the actually insurmountable limit of the speed of light. We can safely spare these explanations, they had also little interest for Amos Vogel, because he notes obviously annoyed about whole passages: "repetitious" (p. 246), and "these setpieces slow the story too much and aren't all necessary." (p. 260) 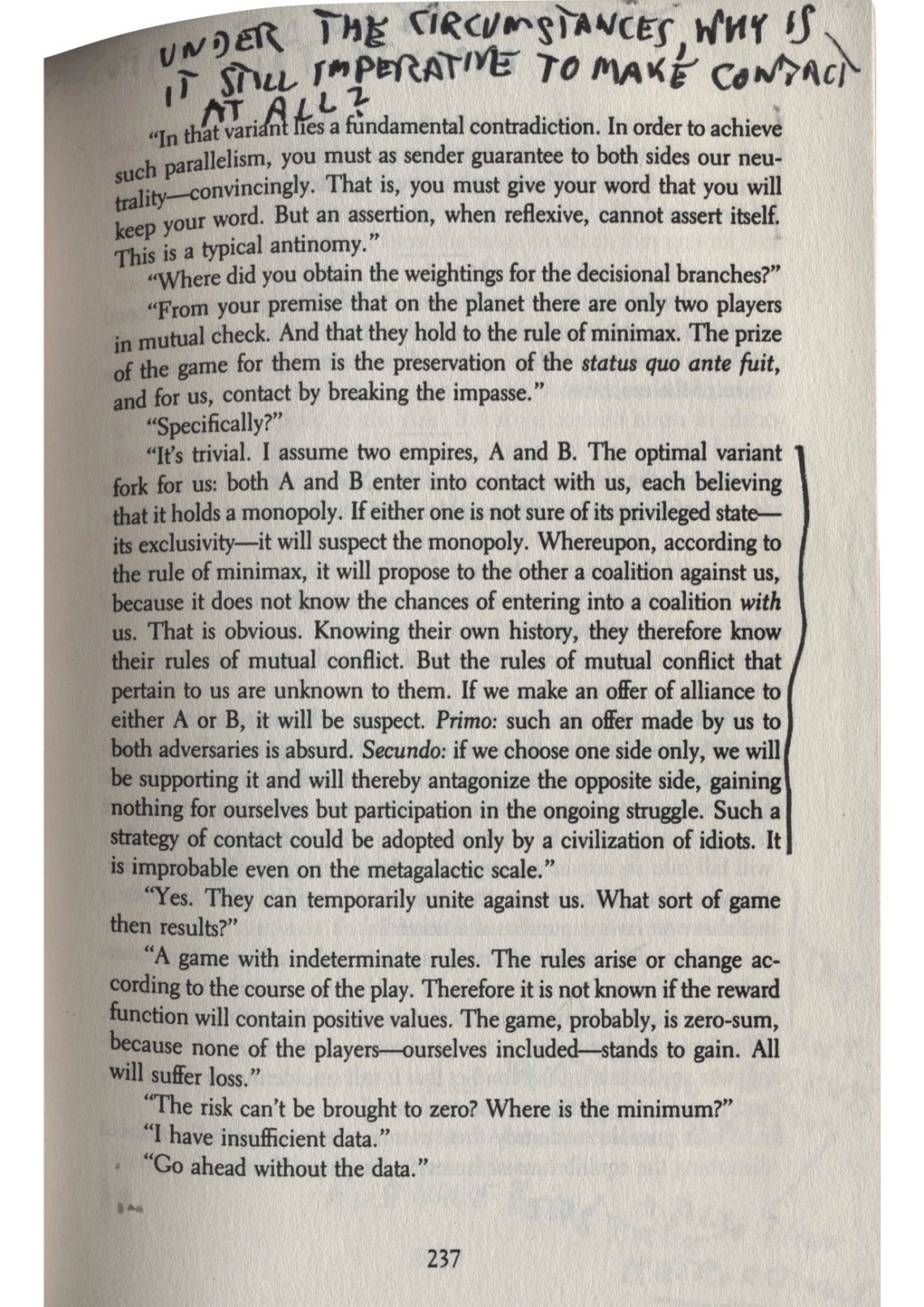 Vogel's interest in the narrative increases dramatically at the moment when the long-awaited intergalactic encounter with an alien intelligent civilization finally occurs, and the Earthlings are stunned to discover that they have stumbled into the middle of a cosmic war zone. Thus, in our selective reading, we have again entered areas that Amos Vogel has been observing closely, reflecting on in a differentiated manner, and commenting on critically throughout his life: the broad spheres of ethical and social issues and the adjacent areas of possible and necessary responses to existing social grievances, distortions, and injustices. In view of the complex challenges presented by Lem regarding the cosmic state of war in which the finally reached extraterrestrial intelligence finds itself, Vogel writes in the margins of the book: "Becoming compulsive – under the circumstances why is it still imperative to make contact at all?" (pp. 236f) 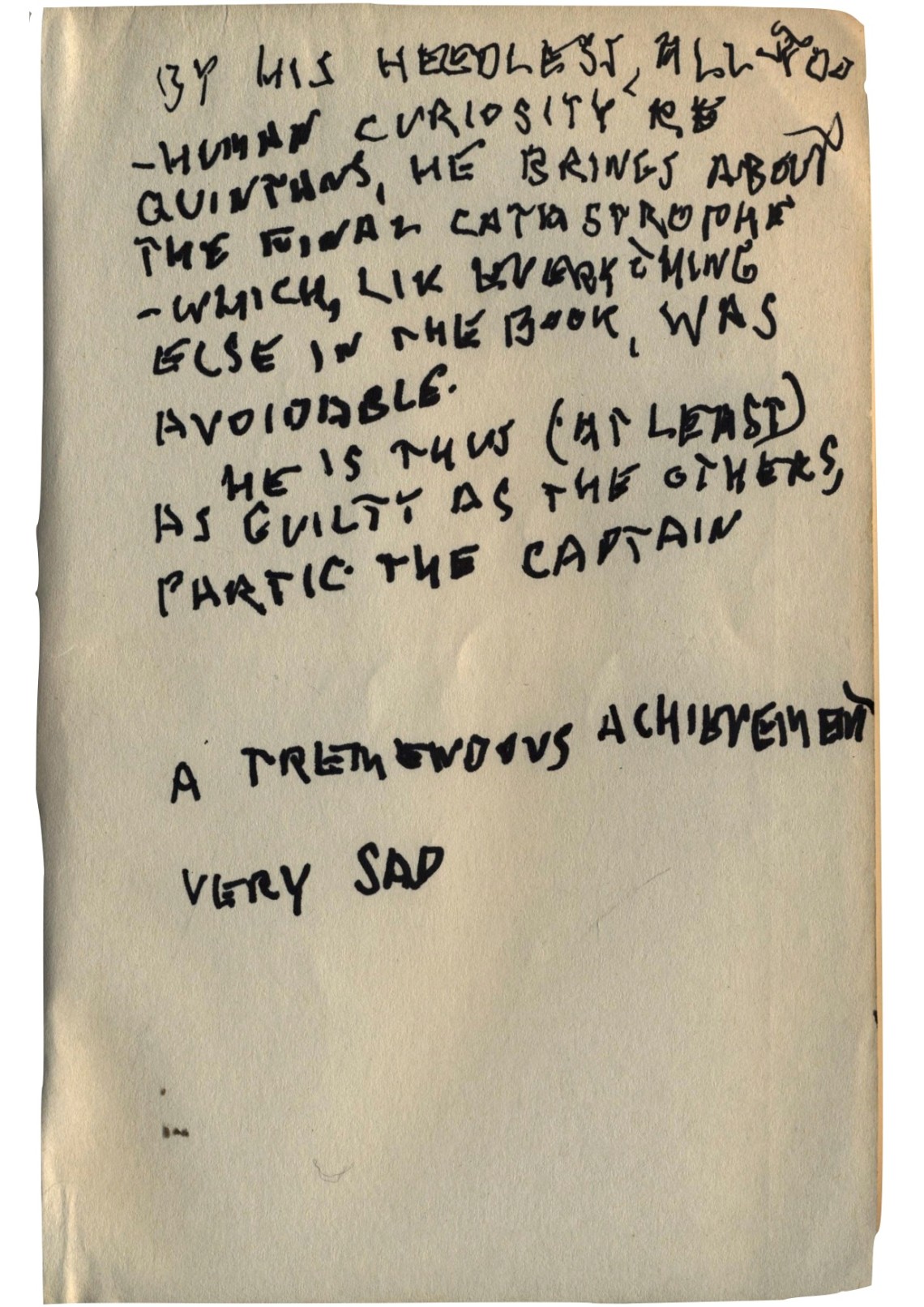 Finally, let us recall that Lem's novel, commented and annotated here, is entitled Fiasco. The fiasco described in this story consists at the end in the fact that the earthlings have already been drawn into a long existing cosmic war by their mere arrival and have become part of an inextricable and irresolvable warlike confrontation, without even knowing the other combatants.

After extensive philosophical and theological considerations, Lem's protagonists see no other way out than the extermination of the entire extraterrestrial civilization that has remained unknown to them so far, in order to prevent the threatening intergalactic spread of the cosmic conflict caused by their own arrival. In other words, this is nothing less than a cold blooded calculated genocide carried out in the name of a universal ethical imperative. Amos Vogel comments on this veritable fiasco on the final pages and inside cover of the book in this manner: "A very dark view of humans and the universe. By his heedless, all too human curiosity [...] he brings about the final catastrophe – which, like everything else in the book, was avoidable [...] A tremendous achievement – very sad." (pp. 322f)