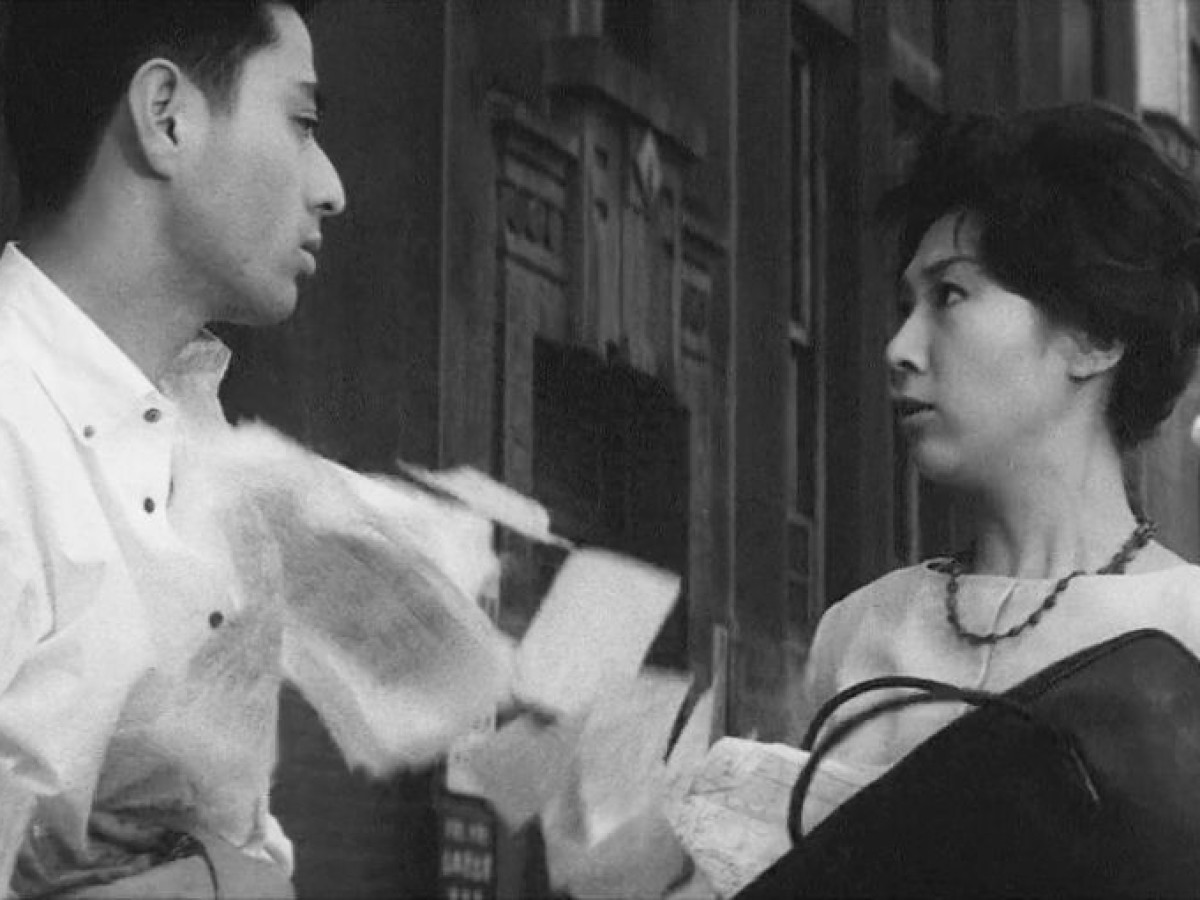 Across his long and storied career, Yoshida Kijū (b. 1933) has reﬁned a singular and inﬂuential mode of politically engaged art cinema. An innovative stylist and profound thinker about cinematic form and meaning, Yoshida helped usher a new spirit into post-war Japanese cinema. The stunning beauty and philosophical depth of Yoshida's major works have led to inevitable comparisons with such contemporaries as Hiroshi Teshigahara and Michelangelo Antonioni, and yet Yoshida went even further in pursuit of an uncompromisingly avantgarde vision. A striking motif recurs throughout Yoshida's ﬁlms: a blinding light, often revealed by the dramatic opening of a door or window, ignites the screen as a reﬂecting surface, at times even threatening to erase the entire image. In these moments where his ﬁlms hover between image and nonimage of pure light, Yoshida reminds the viewer of their own position seated in a darkened room before a screen and subject to the contingencies of human perception, or what Yoshida called in an eponymous essay the "anarchism of sight". In richly enigmatic master works such as Woman of the Lake (1966), Eros + Massacre (1969) and Heroic Purgatory (1970), Yoshida came closest to realizing his ideal of a cinema dynamically open to multiple interpretations and able to empower the fundamental alterity of each individual viewer.

It was completely by chance, or perhaps destiny, that Yoshida (who is also known by Yoshida Yoshishige, the original pronunciation of his ﬁrst name) started working in cinema, attracted by a major Shōchiku recruitment drive just as he was forced to quit his university studies to support his family. Yoshida's ﬁrst passion, and the focus of his uncompleted undergraduate major, was not ﬁlm, but French existential philosophy and literature, a training that informs the rigorous interrogation in his ﬁlmmaking and his critical writing about cinema as a medium, art form and way of thinking. In the famously hierarchical Japanese studio system, new recruits ﬁrst completed an apprenticeship period with a veteran ﬁlmmaker— in Yoshida's case, Kinoshita Kinosuke, among Shochiku's most commercially and critically successful directors, from whom he learned important fundamentals of the craft. Although Yoshida's early writings judged the perceived artistic compromises in Kinoshita's ﬁlms harshly, he later re-evaluated his opinion of his apprentice years. Indeed, a brief, but profound acquaintance with another of the studio's venerated masters, Ozu Yasujirō, would have a lasting inﬂuence on Yoshida's career and would eventually inspire his remarkable book Ozu's Anti-Cinema (1998), which rediscovers Ozu as a radical visionary and kindred spirit.

Together with his fellow Shochiku employees and contemporaries Ōshima Nagisa and Shinoda Masahiro, Yoshida was rapidly promoted to director and leading member of what the studio trumpeted as its own "Nūberu bāgu" (Nouvelle Vague), with the hope being to capture a dwindling youth audience. Placed in the director's chair at a younger age than typical, Yoshida channeled his relative freedom into precocious ﬁrst works that immediately showcased the unconventional approach to image and narrative that would become increasingly radical in subsequent ﬁlms. His impressive debut feature Good for Nothing (1960) seized the Nouvelle Vague mantle by uncannily echoing the ending of Godard's À bout de souffle (released the same year in France but not seen in Japan or by Yoshida until later) while effectively capturing the nihilist spirit of the then-popular cycle of taiyozoku, or "sun tribe", ﬁlms focused on a violently delinquent, decadent youth. Together with early gems such as his absurdist black satire of corporate culture Blood Is Dry (1960), Yoshida's Shōchiku ﬁlms revealed two predilections that would become important constants in his cinema: a talent for inventing bold, often exhilarating mise-en-scene and a fascination for characters driven by an insatiable, potentially self-destructive, and ultimately obscure purpose.

Yoshida's breakthrough came when he was invited by Okada Mariko, one of Shōchiku's popular actresses, to direct what would be his only big budget production: Akitsu Springs (1962), a lush romance set against the backdrop of World War II and its aftermath, with Okada serving both as star and, quite unusually, as producer. A moving portrait of a woman's longsuffering and foreshortened life, Akitsu Springs resembles a conventional melodrama, following Okada in the role of a spirited innkeeper's daughter who revives and falls in love with a soldier with tuberculosis. Yet she will see him transform into a self-pitying lout who callously marries another but continues to return, each time more destructively, to coldheartedly observe her downward spiral as she becomes increasingly lonely and suicidal. Akitsu Springs was also a deeply personal ﬁlm for both Yoshida and Okada, however, partially shaped by autobiographical references to Yoshida's own traumatic childhood experience of the war and serving as the vehicle that brought them together as a couple and lifelong creative partners. More practically, the major box office success of the ﬁlm allowed Yoshida to escape from the studio's increasing constraints soon after and ﬁnd the creative freedom that he craved as an artist.

Working now as an independent ﬁlmmaker, Yoshida launched an ambitious series of enigmatic, feminist-tinged dramas starring Okada as an ambiguously willful woman pushing against the constraints of contemporary Japanese social and sexual mores. In just three years, Yoshida directed six "anti-melodramas", as he boldly named them, in which Okada's arresting heroine forges a difficult path away from normative cultural and cinematic expectations of servitude to husband and family. The inaugural ﬁlm of this series, the psychoanalytically charged fever dream A Story Written With Water (1965), found critical and commercial acclaim despite its near scandalous suggestion of an incestuous bond between Okada's doting, bewitchingly comely and fully independent mother and her sexually conﬂicted son. In the second ﬁlm, Woman of the Lake (1966) Yoshida pushed both the oneiric logic of his narrative and the agency of his heroine even further with its plot that tells the story of woman caught in an triangulated affair who may or may not be turning the tables on her would-be-blackmailer. In this ﬁlm, Yoshida also made his distance from Shōchiku explicit with a sharply satirical sendup of the taiyozoku genre: a fascinating extended scene where Okada and her blackmailer watch a seedy, ramshackle exploitation picture being ﬁlmed on the beach, only to use the same setting to enact their own private and cinematically intense scene afterwards.

Yoshida and Okada's anti-melodramas dramatically expanded a central device deployed pointedly, but subtly in Akitu Springs: the expressive use of landscape and the passage of time as a means of capturing a character's otherwise unexpressed inner feelings and experience. The minimal dialogue in both A Story Written With Water and Woman of the Lake (1966) thus gives greater power and meaning to the stark widescreen landscapes and cityscapes through which their heroines wander with unstated purpose. Together with the fragmented narratives that render past and present, action and reaction ﬂuid, the anti-melodramas suggest that spoken, scripted dialogue cannot capture or even evoke the struggle and experience of Yoshida and Okada's heroines as they seek to break free from the molds that have so often deﬁned women in Japanese society and cinema alike. Yoshida's formal and thematic dialogue with post-war European cinema, and with Antonioni and Resnais in particular, is apparent throughout the anti-melodramas, but is nowhere more evident than in the rarely screened ﬁnal entry to the series, Farewell to the Summer Light. Given a improbable commission by Japan Airlines to feature the airline's newly opened European routes, Yoshida created a lyrical and moving companion piece to Hiroshima mon amour that united two Japanese strangers in a ﬂeeting love affair. They drift through iconic European sites while meditating in incantatory voiceover dialogue upon their fractured, displaced identities and shared trauma of the Nagasaki bombing.

Together, Yoshida's anti-melodramas deﬁned key components of his mature style: an architectonic mise-en-scène, resolutely abstract characters, complexly drifting narratives in which key actions and details are often obscured and a pointed focus on the difficult place of women in Japanese society. All of these elements would be dynamically expanded, if not exploded, in Yoshida's magnum opus, his celebrated revolutionary trilogy comprised of Eros + Massacre (1969), Heroic Purgatory (1970) and Coup d'État (1973). Among the most daring and avantgarde works of post-1968 Japanese cinema, these three ﬁlms are united by their mesmerizing visual beauty, formal intricacy and boldly shape shifting exploration of extreme political ideologies active in Japan, with each ﬁlm engaging with anarchism, communism and nationalism respectively. The opening ﬁlm of the trilogy, Eros + Massacre deepens Yoshida's focus on the perspective and experience of women with its daring fusion of two stories and time periods. The ﬁrst is set in the present day and follows an impassioned activist student researching the controversial anarchist thinker and free love advocate Ōsugi Sakae in the years leading up to his assassination in 1923, while the second story goes back to the Taishō Era to trace Ōsugi's intense relationships with his wife, Noe Itō and his other lover, Kamichika Ichiko, both prominent feminist activists.

A heady, exhilarating, yet ultimately cleareyed ﬁlm, Eros + Massacre captures the ﬂeeting optimism of post-68 Japan with a sense that change and a progressive reconciliation with the past might be possible. The ﬁlm's dazzling intertwining of contemporary and historic registers, which reaches a climax with thrilling scenes of characters from the Taishō era wandering empty modern Tokyo streets, makes the compelling argument that the past is vitally alive and relevant to present day concerns. By Heroic Purgatory, however, this sense of possibility is extinguished as the trilogy takes a darker, paranoid turn, plunging deep into a labyrinthian narrative with psychoanalytical undertones about an atomic engineer and former radical who has become a reluctant servant of the state. Unstable identities and narratives unmoor Heroic Purgatory, which represents the hallucinatory and formally mesmerizing outer limit of Yoshida's open and polyvalent cinema. Arguably darker still is Coup d'État, a tightly claustrophobic portrait of Kita Ikki, a brieﬂy inﬂuential rightwing thinker executed in 1936 for his unsuccessful plot to overthrow the government to reinstate the Emperor. Rather than the fractured voice and perspectives of the earlier two ﬁlms, Yoshida focuses almost exclusively on Kita and a young zealous follower, capturing the two men's extreme narrowness of purpose with a dynamically restricted mise-en-scene dominated by negative space. With its hard, architectonic lines and stark black-and-white cinematography, Coup d'État embodies Kitta's purist dream of a return to the past with almost frightening beauty, an ideological dead end made literal by Kita's ritualistic death. Marking a hypnotically austere and ultimately sobering ﬁnal to his monumental trilogy, Coup d'État also marked the end of Yoshida's work as a brilliant, albeit purpose fully difficult dissector of extreme political ideology. The ﬁlms that followed after a thirteen hiatus are indeed shaped by the notable stylistic restraint exempliﬁed by his most recent feature to date, Women in the Mirror, a meditation on Hiroshima and intergenerational trauma. Yet Women in the Mirror also ﬁnds Yoshida embracing the "anticinema" that he described in his insightful writings on Ozu: a cinema whose surface appearance of balance and harmony is in rich dialogue with a darker logic of disorder and disillusion. In his late ﬁlms, including his startling, incestuous adaptation of Wuthering Heights and The Human Promise, a solemn, yet deeply moving exploration of euthanasia, Yoshida conjures resolutely ceremonial worlds haunted by darkness, despair and death. Long after the age of revolutionary ﬁlmmaking of which he was a vanguard leader, Yoshida continued to unsettle and defy complacent, habitual expectations of cinema by making his ﬁlms give vital, frightening form to the repressed and taboo. (Haden Guest)

A joint retrospective of the Viennale and the Austrian Film Museum, in cooperation with the National Film Archive of Japan