The Austrian Film Museum in Vienna was founded as a non-profit organization by
Peter Konlechner (1936–2016) and film artist Peter Kubelka (born 1934) in 1964, and within a short span of time it established itself as the leading international film centre in Austria. Only a year later, in 1965, the Fédération Internationale des Archives du Film (FIAF) – the worldwide organization of film archives – accepted the Film Museum as a new member. In 1984, the Film Museum organized the first Vienna Congress of FIAF. Founding member Dr. Heinrich Wille (1938–2018), a lawyer by profession, served as the Chairman of the Austrian Film Museum for more than forty years and became Honorary Chairman in 2005.

From its outset, the principal aims of the institution were the high-quality preservation and public presentation of film – and affirming the two roles of film: as the most important form of artistic expression in modernity and as the chief historiographical source of the 20th century.

These aims remain unchanged to this day. Right from the beginning there was a mixture of activities: preservation, restoration, communication, reflection and a comprehensive presentation of the medium under ideal conditions.

Described as "one of the most agile Cinémathèques in Europe" by Der Spiegel, the Film Museum soon created a name for itself due to its programmes. The comprehensive retrospectives of the 1960s and 70s gave it a unique rank in the German-speaking countries. Programmes focusing on such areas as avant-garde film, the comedians of the 1920s and 30s (e.g. the rediscovery of Mae West, W. C. Fields and the Marx Brothers), the Revolutionary Soviet films, classic American film genres, the topic of Propaganda film, or the masters of Japanese cinema were strongly propagated by the Film Museum.

Since October 1965, these retrospectives have been shown in the Museum's own cinema, which is located in the Albertina building behind Vienna's State Opera. For the institution's 25th-year anniversary in the autumn of 1989, the "Invisible Cinema", based on a concept by Peter Kubelka, was inaugurated: a screening room with black-on-black design, a "viewing and listening machine" which permits viewers to focus their concentration with utmost intensity on the film being shown. Since November 2002, the Film Museum has been equipped with a completely renovated and extended projection and sound system which enables the reproduction of all film formats in cinema history as well as contemporary sound and (digital) video systems.

Our program archive contains all programs since the founding in 1964

The collection of important films has been continually expanded since the 1960s. From its beginnings, the Film Museum has acquired classics of international cinema, avant-garde films, historical film documents and newsreels, propaganda films and commercials, etc. Contemporary independent cinema with its frequently precarious preservation status is as much an integral part of the collection as is the area of German-language filmmakers in exile (1920-45).
The cycle of films drawn from the collection and assembled by curator Peter Kubelka under the title "What is Film", an extensive survey of the medium's potential, was finally completed in 1996, as part of the activities celebrating the centenary of cinema.

The original tenets of the Film Museum's work still apply: "Films are to be collected, preserved and presented with the same care and respect which are applied to paintings and the plastic arts. Films deserve to be placed on an equal footing with works of art. Films are specific products of collective memory. They must be preserved and shown in the same fashion as historical source materials and documents: undistorted, unabridged, uncommented and in their original language."

The film, stills and documentation collections were brought together at a single location in the early 1980s in the Film Museum Archive in Vienna-Nussdorf, where Austria's first air-conditioned repository for safety films was installed. The nitate film collection is being kept in a separate, climate-controlled storage space outside Vienna since the 1970s.

Peter Konlechner and Peter Kubelka, the two founders and co-directors of the institution, both retired at the end of 2001. The position as Film Museum Director was then passed onto Alexander Horwath, film journalist, curator and former director of the Viennale (Vienna International Film Festival) who was entrusted with renewing the objectives and expanding the wide range of activities of the Film Museum. Mission Statement by Alexander Horwath

On October 1, 2017, after 16 years at the helm of the Austrian Film Museum, Alexander Horwath retired from his job as director and handed over the leadership to Michael Loebenstein. Michael Loebenstein was appointed by the Board of the Film Museum following the suggestion of an international recruitment panel. In 2004, Mr. Loebenstein had joined the team at the Film Museum to develop and lead the museum's research and education programs. In 2011 he was chosen as CEO of the National Film and Sound Archive of Australia (NFSA) where he served until 2016.
Since 2005, acclaimed filmmaker Martin Scorsese is the Honorary President of the Austrian Film Museum.

>> Information about our association

In 2014, the Austrian Film Museum celebrated 50 years of existence. 21 "Special Projects" reflected not only upon the history, the collections, and the founders of the institution, but also on the cultural moment of the museum's "birth", as well as questions of future historiography and the importance of a museum dedicated to cinematographic film.

Recommended reading
The Austrian Film Museum at Fifty
With a major three-volume publication, the Film Museum wants to illuminate its programming and collections activity since 1964 from various perspectives. 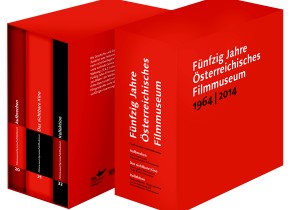